I sit here listening as the weather forecaster on the news this evening warns us of one more bit of snow coming this week. Ugh. Part of me wants to crawl back under the covers for a few days. But another part of me has been loving the tulips, daffodils, and magnolia who have already been braving the early spring temperature changes and are reminding me it's time to come out of hibernation. This hibernation has been extended for our safety, but there are signs other than spring flowers that we can start to think about crawling out again. The roll-out of the Covid 19 vaccines has opened a few doors, though most of us still don’t recognize what we are walking out into. And if you feel a bit like me, you might not even be sure you want to.

Are you experiencing April 2021 feeling a lot like the fictitious character Rip Van Winkle? You remember the man who falls asleep in the Catskill Mountains and when he awakens he discovers shocking changes: his musket is rotting and rusty, his beard is a foot long, and his dog is nowhere to be found? Rip returns to his village, where he recognizes no one. He arrives just after an election, and people ask how he voted.  As he slept through the entirety of the Revolutionary War, he doesn’t even know what an election is and still believes he’s ruled by a King!

Yes, the past twelve months have felt like twenty years to me in many ways. And in many ways I feel like I’m struggling to wake up from all that has happened (and not happened) in the past year. It can be hard to rev up an engine that has been idling for a while...maybe the fuel in the tank is getting low too. And maybe we don’t even know where we want to travel to (metaphorically or actually)!

Perhaps you didn’t know that the author of “Rip Van Winkle”, Washington Irving, created the popular children’s book character after he experienced a failed business venture and filed for bankruptcy in 1818. And you probably weren’t aware that Irving turned to his writing to perhaps earn some money in the follow-up to his business loss. He struggled to think of stories to write until he was reminiscing with his brother-in-law and was brought to life by their nostalgic conversation. Washington Irving then locked himself in his room overnight and wrote the first draft of “Rip Van Winkle”. He said afterward, “he felt like a man waking from a long sleep”. And that was his inspiration.

You may also be familiar with another popular childhood character who wakes after a long rest, the beautiful and serene Sleeping Beauty. She requires just a kiss from a Prince to become conscious again. But for her we know nothing more than she “lives happily ever after” at the end of the age old fable. If like me and Sleeping Beauty you feel a bit like you are waking up from a long sleep; but you are struggling to tap into the inspiration that Washington Irving found within himself to get moving again, I would like to invite you to join me on my 6-week Spin to Activate Adventure. Sleeping Beauty is the inspiration for my “Spin to Activate” journey, but in my version of her story she doesn’t require a kiss, and you do get to find out what happens after she activates!

As soon as you register for the online course you will get access to download and read my short tale, Spinning Straw Into Gold. And then starting on Tuesday May 11, 2021 you will come along with me as we work together toward finding the (sp-)inspiration to activate your “story”, whatever your creative endeavor may be. Whether you are a yarn spinner, want to learn to spin, or would rather take another creative path, I have several ways to embark on the 6 Week Activation Spin Spell with me. Check out the options at Spin to Activate Spring 2021 to register before May 9th.

I look forward to crawling out of hibernation with you~ Pam 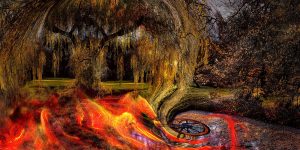