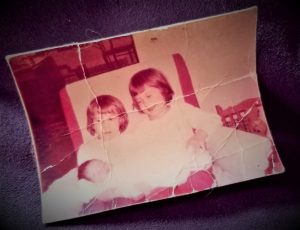 Nearing the age of five I was witness to what at that age seemed to be miraculous.  Month by month my mother’s belly grew larger until it was explained to me that she was “growing a baby” in there.  I would sit next to her and feel the moving of lumps and bumps within her that she explained were the feet and elbows of a soon to be new brother or sister.  I already had an older brother and a sister who at 12 months younger than me seemed to have always existed by my side. But this was going to be a baby, one I could hold and hug.

This new sibling caused me a bit of anxiety, I was anxious to welcome this new baby and was determined to find the best way to do so.  Through this desire to greet my new sibling I somehow became aware that a baby gift was traditionally often something hand-knit.

~Perhaps in an effort to keep me occupied my mother planted the seed of that idea!~ My mom was creative in that way too!

I have a very clear memory of curling up next to my mother on her bed as she showed me the basic garter stitch. I worked with a skein of rather ugly acrylic yarn, variegated in shades of green and white. I don’t remember if it was purchased for the project or just something my mother had on hand.  My mom was an avid seamstress and a quilter, but wasn’t what she would describe as a knitter. She did know the basics though, enough to get me started. My rectangle grew into an irregular polygon with many dropped stitches and holes. Despite it’s homely appearance, this did not worry me as I had also learned some embroidery and I determined I could stitch a daisy at each hole!

Now, many years and many creations later I have woven together a life as a professional textile artist and arts instructor. The Fates are often referred to as “The Three Sisters”.  And while I can't remember what ever happened to that original holey ~holy? piece of knitting, I know that my fate was sealed with the birth of the third and final girl in our family.

...all began in the tumultuous fall of 2016. My own children now grown into adulthood, and the yearning to step away from a longtime studio art and retail business prompted me to make a change.  That is when I began what I am now calling my “Third Act".

“The third act features the resolution of the story and its subplots. The climax is the scene or sequence in which the main tensions of the story are brought to their most intense point and the dramatic question answered, leaving the protagonist and other characters with a new sense of who they really are.” - Wikipedia

Much like knitting was more of a “remembering” than a “learning” process. I have been on a journey the last few years to listen within and remember the true essence of why I am here. This has led me to a passion for creating hand-spun yarn. Yarn spinning was one of the few textile art processes I had not yet completely explored.  Although I had played around with a drop spindle in the past, I was feeling a desire to purchase a used wheel and begin my contemplative practice of spinning spells as a way to process this chaotic world and to listen in a deeper way to my own inner voice. Through this process I have come to “remember” that I am a Stitch Witch of the Highest Order.  And while I still don’t know what that means exactly, I am on a journey to discover what my inner voice is prompting and what claiming that moniker requires.

Now, I want to inspire other struggling stitch witches who are starting to hear this call to join me in the spinning of spells and plying of prayers; and I am inviting any additional characters who desire to find a new sense of who they are to join me in my Third Act which I have titled, Spinning Straw Into Gold.

My Third Act will focus on the three main aspects of my current mission.  First, I will raise the visibility and value of feminine art and traditionally female craft techniques ~crafti-feminism. Secondly, I will promote the creative reuse of salvaged materials and the sustainable use of our earth’s resources ~ eco-art . And finally, I desire that my art and the creative process be utilized as a method of healing and therapy for individuals as well as Mother Earth~~~~For that is how a Stitch In Time Saves!

While I began my journey early in life, I have often wandered off the path and felt lost in the dark. Distractions have slowed my progress and I have wondered whether my destination even exists. I’ve also questioned whether I must “go it alone” in order to get there, or at the very least find different companions.  But, despite the appearance of occasional clouds, I now see the horizon getting brighter and my purpose for this trip is getting clearer every day. I look forward to meeting new faces in the miles ahead and sharing the joy of discovering the pots of gold along the way, while together we remember that...

A Stitch In Time Saves

Read the Introduction to Spinning Straw Into Gold and find out more about Yarn Spinning as a Contemplative & Meditative Practice.

Intro to Spinning Straw Into Gold
Posted in A Stitch In Time and tagged art inspiration, textile art, yarn spinning